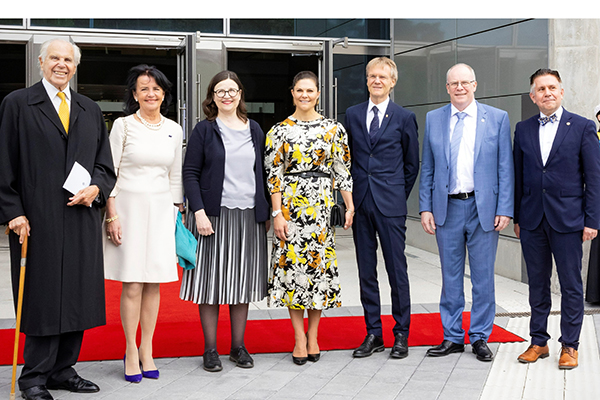 The official inauguration of Building 10 at the New Ångström Laboratory with ribbon cutting by Crown Princess Victoria was held on 13 May. “With its fantastic flexible classrooms and modern lab rooms, I’d like to say that this facility is almost unique in Europe,” said Johan Tysk, Vice-rector of the Disciplinary Domain of Science and Technology.

Many curious onlookers had assembled to observe the inauguration ceremony when the Crown Princess’ entourage arrived just before 3 p.m. In his speech, Vice-Chancellor Anders Hagfeldt alluded to historic land on which the New Ångström is built. The first successful landing of an aircraft presumably took place there in September 1913, probably witnessed by Anders Ångström, whose grandfather named the surrounding university buildings.

“Now we’re also ready to start a new story. I’d like to take this opportunity to thank everyone who made this possible. Many thanks for your kind words and deeds and for all your work,” said Vice-Chancellor Anders Hagfeldt.

In his emotional speech, Johan Tysk also took pleasure in thanking all partners and expressed the hope that Building 10’s modern premises would attract students and researchers from all over the world. He said the building symbolises a strengthening of education and research in science and technology.

“We’re now making a big investment that we think will be good for our country, our city and, if I may be so bold, even for our world. So this building  says to all of us: we want to make a contribution – now we’re moving forward!” said Johan Tysk.

Through the many years of project development, the students have also been involved, among other things, in designing the environments and naming the teaching premises, explained Anna Ivert, chair of the Uppsala Union of Engineering and Science Students. While student influence and student participation are rarely seen, their involvement is clearly visible here in Building 10.

“It shows that what we do matters and that we as students can make a difference if we work together,” said Anna Ivert.

Many have contributed to the whole project

The following speakers, Cecilia Broman, construction project manager, Hayar Gohary, project director of Akademiska Hus and Henrik Lundin, business manager at NCC, thanked everyone involved in the project and specifically praised the strength of collaboration. As Hayar Gohary put it, “the whole is precisely the result of our ability to work together, to turn dreams and concepts into actual buildings”. 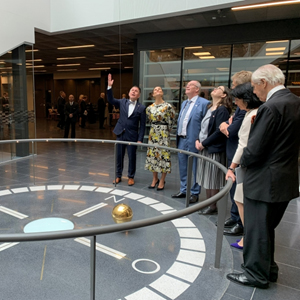 It was then time for the Crown Princess to perform the ribbon-cutting, accompanied by a trumpet fanfare and applause. The entourage then set off on a tour of Building 10, including the display of the Foucault pendulum that hangs from a 28-metre long wire in the roof of the atrium. The Crown Princess also participated in a programme in Eva von Bahr’s hall including researchers, students, alumni and partners. Anna Ekström, Minister of Education, spoke about the role of science and technology in society and mentioned Building 10 in her concluding words:

“Congratulations on a fantastic building and for all the research and education that will be conducted here to contribute to a better world”.

Building 10 is part of the New Ångström building project. The new main building is located north of the Ångström Laboratory and houses teaching and research facilities for the science and technology fields. The house measures around 23,000 square metres and is home to just over 1,200 students and 400 employees. It also includes offices, reception, student services, meeting areas, restaurant, library, lightwell, auditorium and a visualisation theatre. The upper levels of the building houses the Department of Information Technology. The ground-breaking of the construction took place in October 2018 and the first employees moved into Building 10 in January 2022.

The first stage of the New Ångström project, Building 9, was inaugurated on 9 September 2020, and is home to the Department of Physics and Astronomy as well as classrooms.