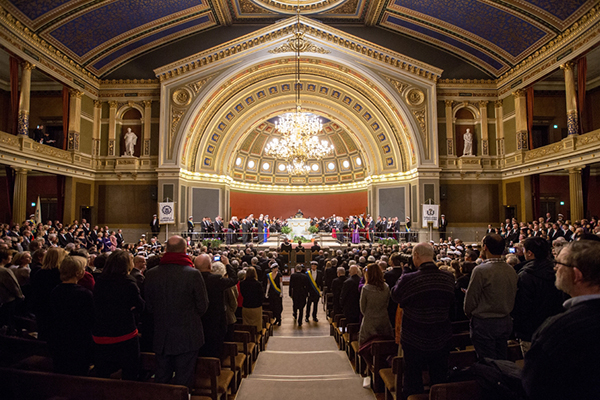 The Deans and Vice-Chancellor of Uppsala University have decided that this spring’s doctoral degree conferment ceremony will be moved from Friday 29 May 2020 and will instead take place on Friday 13 November 2020.

This change of plans is due to the infection control situation associated with COVID-19 and the current regulations on public gatherings, along with the University’s regulation on conferences etc., which has been extended to remain in effect, at present, until 15 May. This year’s inauguration of professors, which was previously scheduled for 13 November, will be cancelled and the new professors appointed this academic year will be inaugurated next year instead.

Doctoral graduates who have registered for the ceremony are being informed of the new date. Their registration will remain valid. The deadline for registration, which was 1 April, will not be changed.

Anyone who reaches the three-year limit in the meantime, under the rule that doctoral graduates must participate in a conferment ceremony within three years of defending their thesis, will still be able to participate.

Doctoral graduates who are entitled to participate in the conferment ceremony but who are unable to attend on the new date because they have moved abroad or for some other valid reason can obtain leave from the Academy Steward, by instruction from the Vice-Chancellor, to participate in absentia. Notification of impediments or substantiated requests to wait until a later conferment ceremony must be sent to the Conferment Ceremony Office.

Jubilee doctors in spe who have been invited to the spring conferment ceremony will be informed and will receive a new invitation at the end of the summer. They should send in their personal data as previously advised.