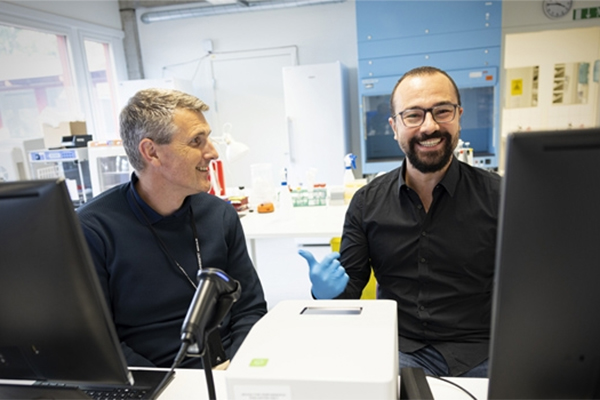 In just 30 minutes, their test can determine which antibiotic is required to treat a urinary tract infection. Johan Elf and Özden Baltekin are recognised for their innovation, which will help reduce antibiotic resistance and advance personalised care.

The Uppsala University Innovation Prize “Hjärnäpplet” for 2022 has been awarded to Johan Elf and Özden Baltekin.

“It feels amazing! I was really happy when the vice-chancellor called, but also very surprised. I thought he wanted to talk about something else,” says Johan Elf, Professor of Physical Biology, whose sentiment is echoed by his fellow award winner.

“I was shocked when I found out. I almost thought it was a prank,” says Özden Baltekin, PhD student at the Department of Cell and Molecular Biology and Program Management Director at Sysmex Astrego.

The right treatment straight away

The two researchers are recognised for having developed a test, the Antibiotic Susceptibility Test, that can be used in suspected cases of urinary tract infection. In less than half an hour, their analysis method can show whether there is a bacterial infection and what type of antibiotics should be used.

“That’s the advantage of our test. After your first visit to the doctor, you’ll get the right treatment straight away with an antibiotic that will be effective against your bacterial infection,” says Özden Baltekin.

“This is the great advantage; with our method, you can once again start using antibiotics for which there’s high resistance in patients in whom they’re effective. This also allows us to reduce the development of resistance.”

Developing a test that could soon be marketed worldwide was not part of the plan. Özden Baltekin is Johan Elf’s doctoral student, and they were actually just trying to understand the growth of single bacterial cells under different conditions. It transpired, however, that they were also able to use the tools they developed to quickly see how sensitive the bacteria were to different types of antibiotics.

“Coming up with something that was directly usable was really unexpected. We were actually looking to develop technology for use in basic research, so this wasn’t even on our radar. You read about discoveries like this, but you don’t think it can happen,” says Johan Elf.

Bought by a Japanese company

In 2017, they started a company to make their test available to the healthcare sector. The company grew and was acquired by Sysmex Corporation of Japan in May 2022. Its subsidiary Sysmex Astrego, with around fifty employees, is still based in Uppsala, where all production takes place.

It is mostly Özden Baltekin who works in the company today. He is Program Management Director working in product development, amongst other things. Things have gone so well that his academic career has had to take a back seat.

“If we hadn’t started the company, I was planning to defend my thesis in September 2017. It's finished in terms of research, I just need to write it up and defend it. But I’m having a lot of fun here, too,” says Özden Baltekin.

The Uppsala University Innovation Prize “Hjärnäpplet” is awarded annually to researchers or doctoral students to recognise and reward the generation of research results or knowledge assets that have led to an innovation with the potential to create major societal benefits and contribute to a sustainable society. The prize is intended to reflect the entire University’s breadth, innovative strength and quest for a sustainable future.

“The Uppsala University Innovation Prize ‘Hjärnäpplet’ for 2022 is awarded to Johan Elf and Özden Baltekin for developing their innovative method to advance human health and well-being. They have made a decisive contribution to the development of new rapid tests for antibiotic-resistant bacteria, and to the development today of the world’s fastest diagnostic antibiotic susceptibility test for urinary tract infections by the spin-off company Astrego Diagnostics.”

Find out more about Hjärnäpplet