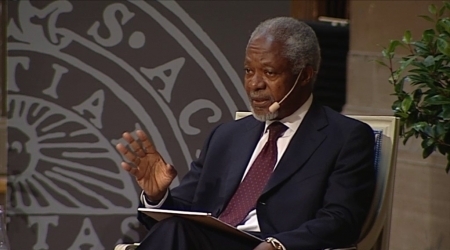 Statement on the death of honorary doctor Kofi Annan

In 2001, Kofi Annan and the United Nations were awarded the Nobel Peace Prize. In 2007, he received an honorary doctorate from Uppsala University during the University’s celebration of the three hundredth anniversary of the birth of Linnaeus. Kofi Annan gave lectures at the University on several occasions, including the Hammarskjöld Lecture in 2001 and most recently a lecture in September 2013 that filled the Grand Auditorium.

“At this time my thoughts go to his family and close friends. I met him several times, both here in Uppsala and earlier in Lund. Like everyone else, I was deeply impressed by all his achievements as a statesman. But as Vice-Chancellor, I was also impressed by the great interest he took in our students. Whenever he visited, his priority was to meet students and he always took the time for a conversation or a selfie. He always emphasised that every human being counts and that we all share a responsibility to make the world a little better.”

The University will fly the flag at half-mast for his funeral.