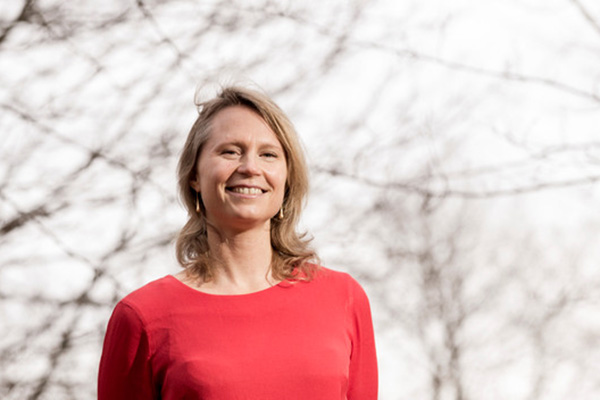 What is it like for a researcher to put on the interviewer’s hat? Researcher Annika Skoglund talks with representatives from academia, the business community and politics in the Novum Organum podcast.

Since its launch in March 2021, of the four interviews so far in the series, only one was via Zoom. Otherwise, Annika Skoglund has received guests in her office at the Department of Civil and Industrial Engineering at Ångström Laboratory. First up to be interviewed was a former Executive Director of the Nobel Foundation, followed by a minister for higher education and research. Then a business leader and, most recently, a serial entrepreneur. An impressive list considering the busy schedules of these people.

“Often the people I’m most interested in talking to are also the busiest,” says Annika Skoglund, Associate Professor in industrial engineering. “But it wasn’t actually that difficult to get Minister Matilda Ernkrans to accept the invitation. And that interview was done via Zoom, which also made it easier for her to participate. I think she is genuinely interested in finding out what we do in the world of research and how she can be good for us; something I tried to bring out in our conversation.”

The conversations in the Novum Organum podcast focus on topical issues being highlighted in the academic world, but also connect to how research as an activity has developed over time. According to Annika Skoglund, research now is a lot about researchers being expected to generate value and having a greater role in societal development and solving global problems, especially in the form of interdisciplinary solutions, which are often a requirement for being granted research funding. As the podcast’s name suggests, the focus is on new methods and innovative ways of building bridges between theory and practice, even though initially people in power have been prioritised guests.

“Moving from research to practical application is often about involving the business world or the political sphere with policies that convert research into action. What I want to investigate is how this spreads. It’s no longer seen as enough to write scientific publications. There’s an expectation that our knowledge needs to be applied in the community in other organisations that are ‘doers’,” says Annika Skoglund.

Starting the podcast has given her an outlet for additional needs: meeting new people, and contributing to the University’s third task – interacting with the community at large. Originally, she also had the aim of getting engineering students at the Uppsala School of Entrepreneurship to develop a podcast hosted by researchers and students for international distribution. The idea was in the timetable for a course module in market research and market analysis.

But the students were not comfortable interviewing people in English. In addition, they wanted to make a podcast by and for students, which led to the development of the Entreprenörskap (entrepreneurship) podcast.

“To date the students have produced about ten episodes of Entreprenörskap. The students have taken on this challenge in an impressive way, and have been really successful in exploring the conditions that are fundamental to innovative business and technology-based entrepreneurship,” says Annika Skoglund.

Research according to Nobel

Even though a student podcast in English didn’t eventuate, Annika Skoglund hopes to reach an international audience with Novum Organum which is in English. This was also one of the reasons why she wanted to interview Lars Heikensten, former Executive Director of the Nobel Foundation.

“Many people know about Sweden because of the Nobel Prize, and many of my colleagues have been and are involved in judging the Nobel Prize. Lars Heikensten retired at the end of last year, and I thought that this would mean that he could talk a bit more freely and openly about how it had been. I also thought he might actually have time to come here for a podcast episode.”

Nobel is known of course for connecting research with various kinds of entrepreneurship and was not an academic researcher, she adds.

“On the other hand, the Nobel Prize today is mostly awarded for academic research. What I hoped to hear from Lars Heikensten, having been Executive Director for ten years, was what the Nobel Foundation thought about interdisciplinary research in relation to Alfred Nobel’s will, and that the Nobel prizes are awarded in specific disciplines such as chemistry, medicine and physics. It was a very interesting meeting and a good recording.”

Novum Organum operates under the University’s umbrella and Annika Skoglund would like more colleagues to use the podcast to produce episodes themselves. Soon she will also change its recording location: she has been promised a podcast studio next to an ‘Innovation Lounge’ in the old Reception area of Ångström Laboratory, with glass windows to attract passers-by. Her strategy to create a high-visibility, creative meeting place across generations, for researchers, students and alumni, looks like becoming a reality.

“My department has promised to fund the rent for five years to come. But the podcast studio is open to everyone. I hope to welcome students and alumni alike there who want to help researchers generate value for society.”