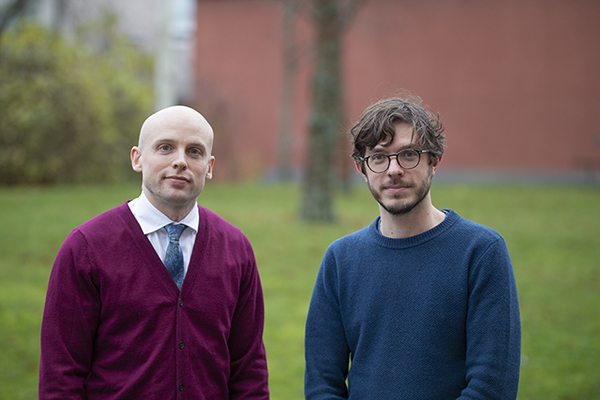 Lawyer Oskar Mossberg and rhetorician Erik Bengtson met in a third-cycle course and are now running an interdisciplinary research project in the field of energy together. Photo credit: Anders Berndt.
2022-03-01

How do researchers in widely differing subject areas actually meet and then go on to apply for funding for interdisciplinary research projects? Oskar Mossberg, postdoc in law, and Erik Bengtson, doctoral student in rhetoric, tell us about how their joint research project came into being.

This interdisciplinary research project was awarded funding by the Swedish Energy Agency, and Oskar and Erik intend to investigate the increasingly widespread social phenomenon of climate pledges. Those ‘green’ promises which have become a common feature of companies’ and organisations’ strategic communications.

“Because I’m a rhetorician, it’s exciting to be working with a lawyer,” says Erik Bengtson. “Generally, as a rhetorician you might write a book and hope that someone reads it. But this is a clear opportunity to have a concrete impact on society.”

“Rhetoric has a lot to contribute to how you interpret a text,” says Oskar Mossberg. “There are, of course, analytical tools in the field of law, but also undoubtedly scope for developing more tools. Law is largely about language.”

Met in a third-cycle course

Oskar and Erik met by chance in a third-cycle course in German and then at a seminar, ultimately telling each other that it might be fun to do something together.

Erik Bengtson and Oskar Mossberg agree that opportunities to meet researchers from other disciplines are important. But the most important places to meet may not be special gatherings intended to encourage interdisciplinarity. It can be difficult to generate interdisciplinary ideas ‘on demand’, plus the fact that you often need a clear incentive for the person to take the time.

“Events where you might meet researchers in other disciplines are often about something else; there have to be incentives to attend the event. Otherwise, it easily becomes just one more thing you have to do, or even something you actively choose not to attend,” says Oskar Mossberg.

“So, the best places to meet people from other disciplines can be courses or seminars that the researcher or doctoral student feels that they really need,” says Erik Bengtson.

They emphasise how important it is that the initiative for research projects does not come from the top down. Furthermore, doctoral students are often an asset in this context because they don’t always stay within the bounds of their own disciplines, and it’s important to exploit this in the best possible way.

After they met and started talking, they got help in the application phase from the Centre for Integrated Research on Culture and Society (CIRCUS), which has been tasked with promoting interdisciplinarity. CIRCUS is based within the Disciplinary Domain of Humanities and Social Sciences.

Via CIRCUS, they were able to participate in a seminar series about the application process, then got help from a third party who read the application. CIRCUS also provided a sounding board and assistance in refining their application.

“For us, it was important to see how others responded to the application, what we needed to explain better to each other. When you do research, you are very much involved in your subject area, so it’s difficult to look at it as an outsider would,” says Oskar Mossberg.

The research application was a joint process. They had Zoom meetings, shared a Google document and wrote it together.

“It was reassuring to have worked together so closely on the application. Now we know that we can work together,” says Oskar Mossberg.

At the end of the application process, they discovered that the budgeting and calculation models differed between the departments involved. It turned out to be a challenge to put together a joint research budget.

“All the finance officers are under pressure during application periods, and we had to take a great deal of the responsibility ourselves for putting together a budget that impacted two separate departments,” says Erik Bengtson.

“Yes, it was an unanticipated challenge that came at the end of the application process,” says Oskar Mossberg. “The two departments involved do their calculations in different ways and have completely different calculation models.”

They conclude that it would have been easier if there had been specific support available for interdisciplinary projects involving several different departments, or if the departments had calculated in the same way.

Although the research project has barely begun, it is interesting to hear their thoughts about publishing the results of their research.

“We plan to write and publish together but with slightly different focuses for publications within our two subject areas,” says Oskar Mossberg.

“Then there are also journals that are not as subject-area-specific, for example within climate transition, which would suit our project well,” Erik Bengtson adds.

They also plan to write about their research results in a more easily accessible form, perhaps as a monograph, for a wider audience of readers including politicians and communications officers at companies.