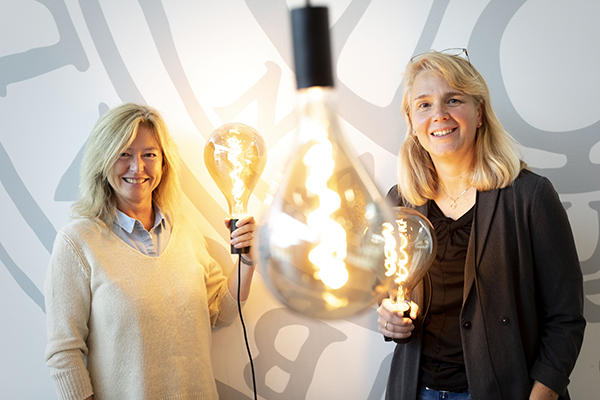 With the Triplets model, small groups help each other to develop their skills on an issue they choose themselves,” say Cecilia Edin and Maria Tovar at the Study Counsellors and Career Office. Photo: Mikael Wallerstedt.

The Study Counsellors and Career Office will start a new type of continuing professional development (CPD) for study counsellors this autumn using a new model they have developed. The model, which is called Triplets, can also be used in other areas of skills development.

‘Triplet’ is a musical term and means three notes played after each other in a way that breaks with the pulse of the music. For example, a triplet might consist of three quavers, all of equal duration, that together have the same duration in the music as two quavers.
“We have taken our inspiration from the musical term for our CPD model and called it Triplets,” says Cecilia Edin, Head of the Study Counsellors and Career Office. “The symbolism is a break with everyday work where everyone is on the same level and everyone takes an equal share of the responsibility.”

The Triplets model starts with an ideas seminar where different themes for CPD are generated in groups that have been randomly put together. These themes range from concrete projects to business intelligence and advanced theory. After the ideas seminar, everyone can register for the themes they want to work with, giving their first, second and third choices. The course coordinators then put together groups of 3-4 people based on the themes they have chosen. Of course, there is nothing to prevent several Triplets groups from working with the same theme.
“The ideas seminar is important because it controls a lot of what happens next,” says Maria Tovar, study and career guidance counsellor.

An important point of using the Triplets model is that each staff member’s manager must have agreed to their participation.
“This makes it clear that this time has been set aside to work on the theme of the Triplet,” says Cecilia Edin.

All the Triplet groups meet at one kickoff, after which each Triplet group works independently. They have to identify goals, how they want to work, and how often they will meet. The idea is to meet at least once a month over a period of six months. The plans they develop and their meetings are documented so that all the Triplet groups can share in each other's work.
“It’s important to be able to follow each other’s work as inspiration and also because obviously everyone is going to be interested in the issue that each group is working with,” says Cecilia Edin. “We also have a mid-way review where some of the Triplet groups get to talk about their work. The process concludes with a final seminar where all the Triplets present their conclusions.

“Triplets are a unique opportunity to do what you have thought about doing or developing in your work for a long time but never managed to do because you rarely have time to spare,” says Maria Tovar. “Many study counsellors sit isolated in their role, trying to solve the same problems and satisfy the same needs as their colleagues. With the Triplets as a forum and with the time allocated, you can develop the quality and professionalism of your work while also developing a network of other study counsellors.”

“Triplets can also be a good opportunity to try something new in your work with the others in your Triplet group and then to discuss how things turned out. Otherwise, it’s easy to stick with using what you are familiar and confident with,” says Cecilia Edin. “I’m sure that many have the experience of going to a conference as CPD and hearing lots of exciting things but then nothing changes when you come back. With the Triplets model, you have time set aside to work on an issue you have chosen yourself with a couple of colleagues, and we believe that results in better CPD,” says Cecilia Edin.

Can be used in other skills areas

The model has been developed for the needs of study counselling but of course the Triplets model could also be used just as well in entirely different occupations or areas of need for CPD.

An obvious question is, of course, how much work Triplets entail for the course coordinators.
“Most of our time is spent on the ideas seminar and the final seminar. If the final seminar is conducted as a study visit, that obviously means quite a lot of work to make it a meaningful programme,” says Cecilia Edin.

“Between the seminars, we monitor the Triplets groups and provide support if needed, but that doesn’t require much work in general,” says Maria Tovar.

For study counsellors who are interested in participating in Triplets groups starting up in the autumn 2020 semester, the following dates are important: