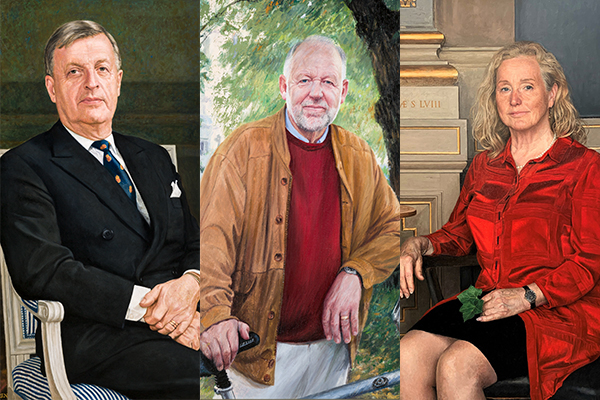 In the autumn, former vice-chancellors Stig Strömholm will be celebrating his 90th birthday, Bo Sundqvist his 80th and Eva Åkesson her 60th.
2021-09-13

During the autumn of 2021, three former vice-chancellors of Uppsala University will each be having ‘decade’ birthdays. In total, all of 230 years of life being celebrated.

In September, Stig Strömholm will turn 90 years old, Bo Sundqvist will turn 80 years old, and in December Eva Åkesson will turn 60 years old. Taken together, they have served as vice-chancellors of Uppsala University for about a quarter of a century. Here are some of the highlights from that history.

Stig Strömholm will turn 90 on 16 September. He was Vice-Chancellor from 1989 to 1997. Stig Strömholm’s doctorate was in comparative jurisprudence.

During Stig Strömholm’s time as Vice-Chancellor, a number of older endowments to the University were transformed into foundations. This put an end to a dispute with the Swedish State making it clear that the endowments and the proceeds from them were not general public property but were to go to the objects intended by these endowments, which included research and students.

Bo Sundqvist will turn 80 years old on 21 September, and he was Vice-Chancellor from 1997 to 2006. Bo Sundqvist defended his doctoral thesis in nuclear physics.

It was also during Bo Sundqvist’s time as Vice-Chancellor that a more coherent structure to support research funding, alumni contacts and fundraising was established.

During his term as Vice-Chancellor, major refurbishments of the University’s premises were carried out – a project that began under Stig Strömholm.

Eva Åkesson will turn 60 years old on 30 December, and was Vice-Chancellor from 2012 to 2020. She defended her doctoral thesis in chemical physics and became the University's first female vice-chancellor.

When Eva Åkesson was inaugurated as Vice-Chancellor, she laid the foundations for the strategic priorities that remained in focus throughout her term of office: quality assurance, talent attraction and career systems, internationalisation, and infrastructure. Other important matters were the role of the University in the community at large and forms of management and control within the University.

All of these are matters that remain very much on the agenda, and perhaps are most clearly expressed by the University’s current goals and strategies, which were developed and decided on while Eva Åkesson was Vice-Chancellor.

In that situation, drawing lots was used to decide the matter. The youngest member of the University Board, a pharmacy student, got the rather unenviable task of drawing one of two lots which fell to Stig Strömholm, who thus became the new Deputy Vice-Chancellor.

Move across the street