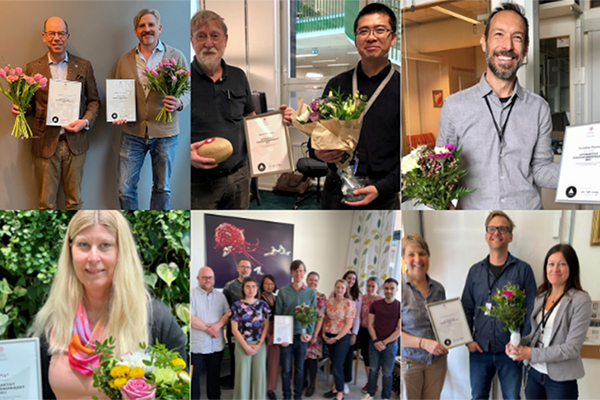 Honoured for progress from idea to innovation

UU Innovation recognises research-based innovation projects that have engaged funders, investors and customers for further development and exploitation. Six new projects have been honoured with the Attractive Innovation Project award.

Launched by UU Innovation in 2017, the Attractive Innovation Project award is given to innovative projects and start-ups that have successfully attracted external funding that has further strengthened their development potential. Due to the pandemic and national restrictions, the announcement was delayed in 2021, but now both the four projects that qualified for the award then and the two that have managed to attract external funding so far this year have received diplomas and flowers.

All projects are active in the life science field and develop innovative solutions related to prevention, diagnostics, treatment and after-treatment - with the goal of improving health.

“Scientific advances contributes greatly to the high pace of innovation within life science and our university is a shining example of this. We are happy that we finally had the opportunity to meet the innovators in person and show appreciation for their successful work. It is important to recognise good progress, and funding is key to ensuring that innovation projects develop further in a desirable way,” says Malin Graffner Nordberg, Head of UU Innovation.

The funding for the projects can come from public or private funders, from customers or collaborative partners, and can be in the form of grants, investments or sales revenue. Another common factor among projects that receive the award is that have been started and run by researchers and students at Uppsala University, and have received support from UU Innovation in the early phase of the journey from idea to innovation.

These are the new award-winning projects:

The researchers have developed a series of new chemical compounds intended for further development into future drugs for the treatment of lung diseases such as fibrosis. The project has been conducted in collaboration between the Department of Medicinal Chemistry and the Department of Pharmaceutical Biosciences, and with the support of the SciLifeLab drug discovery and development platform. The researchers have applied to patent the substances and formed a company called HalaCore Pharma, which has sold the rights to a listed pharmaceutical company that will take over responsibility for development.

Rarity Bioscience is a precision diagnostics company aiming to commercialise a robust new technique for detecting small amounts of DNA mutations, particularly in blood samples. The technique has a very high sensitivity and could provide healthcare professionals with a whole new way of monitoring cancer patients to detect and prevent recurrence at an early stage. Rarity Bioscience is a spin-off from Professor Landegren’s research group, which is conducting world-leading research in the field of molecular tools. Uppsala University Invest AB has invested in the company.

The researchers have developed new computational chemistry methods with the potential to have a major impact in structure-based drug design. The methods enable the rapid and highly accurate prediction of how and how strongly particular drug molecules bind to key receptors. Using computer calculations to reduce the number of compounds that need to be tested or synthesised in order to identify the most promising drug candidate among millions of potential compounds is of great interest to the pharmaceutical industry. The researchers have received funding in national competition from Vinnova’s VFT+ programme to further develop the methods commercially, which is now being done in the company Mod4Sim Pharma that the researchers founded.

The research team has been working for many years to develop HPVir, a combination of a self-sampling kit and an HPV test. The test is designed to detect whether a woman is infected with HPV (human papillomavirus) and thus at greater risk of cervical cancer. Almost all cases of cervical cancer are caused by HPV infection. HPVir testing uses a special sampling card that makes samples stable at room temperature for several years and also allows safe handling of the samples. The effectiveness of HPVir, both in terms of accuracy and propensity to test, has been proven by a large number of scientific studies. Health economic analyses show that the method is cheaper than current screening with gynaecological cell sampling. The project has received funding in national competition from Vinnova’s VFT+ programme.

Tools for combined diagnostics and gene therapy of brain tumours

Building on promising results from a previous ERC Starting Grant project, Fredrik Swartling and his team are developing new tools to identify cells that have become resistant to standard treatments, usually radiation and chemotherapy, for malignant brain tumours. The aim is to use the tools to screen cells taken from biopsies during brain tumour surgery to better identify and treat patients at risk of serious recurrence. The project has received an ERC Proof of Concept grant to strengthen the conditions for future commercialisation.

The multidisciplinary research team has developed a group of novel molecules that have a very good ability to block coronavirus from replicating. The research has been carried out in collaboration with the pharmaceutical platform at the Science for Life Laboratory. The hope is that the discovery will form the basis of a future antiviral drug against coronavirus that can complement vaccines and contribute to treatment options against new virus variants. The road to a new drug is long, and the first step is to further develop the molecules to ensure that they have the essential properties required. UU Invest’s project company has invested in the project and is assisting the research team in investigating the interest of pharmaceutical companies to work further and develop the drug.