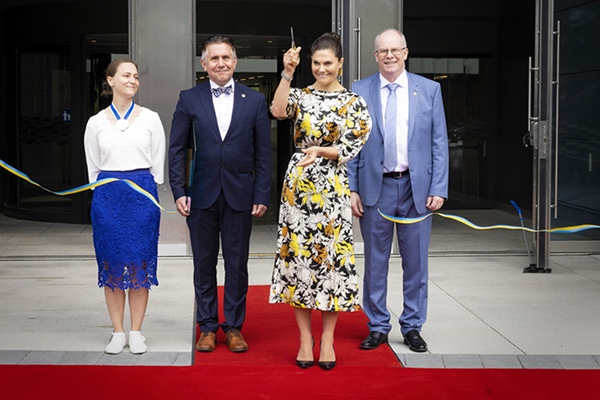 The new Ångström was officially opened by Crown Princess Victoria on 13 May 2022. The Crown Princess is flanked by Anna Ivert, president of Uppsala Union of Engineering and Science Students, Johan Tysk, Vice-rector of the Disciplinary Domain of Science and Technology and Anders Hagfeldt, Vice-Chancellor Uppsala universitet. Photo: Mikael Wallerstedt.
2022-05-16

New Ångström will inspire creativity and an inter-disciplinary approach

The intention, with various types of places to meet, art works made of concrete and pendulum experiments, is that the new Ångström will inspire students and researchers to meet and come up with new ideas.

The ornamentation of the new Building 10 in the Ångström Laboratory, entered through the modern concrete portals that surround the entrance doors, is dominated by two objects in the atrium in the middle of the building.

A pendulum is suspended alongside the wide staircase rising from the atrium, and in another part of the atrium there is a lopsided block of concrete. 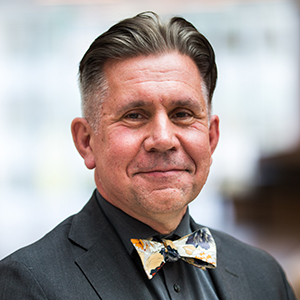 Johan Tysk, Vice-rector of the Disciplinary Domain of Science and Technology, has emphasised in various contexts during the project period and during the construction period that the new Ångström is intended to strengthen the intellectual environment and encourage social encounters between students, teachers and researchers in various subject areas.

“I believe that these random encounters, the unplanned encounters between researchers and students, will make this a superb place for research, education and innovation. This is a building made for creativity and inter-disciplinary encounters,” Tysk has said in interviews.

The pendulum that oscillates back and forth alongside the staircase is a Foucault’s pendulum. As well as the slow pendulum motion, the pendulum rotates clockwise at floor level. The pendulum and the experiment are named after the French physicist Léon Foucault, which conducted this experiment in 1851 to prove that the Earth rotates about its own axis.

The pendulum in the Ångström Laboratory weighs 20 kilograms and hangs from a 28-metre long piano wire suspended in the beams above the atrium. The pendulum completes one revolution at floor level in 27.7 hours. But it is not actually the pendulum that rotates, it merely swings back and forth in a constant pendulum motion. It is the Earth that rotates about the pendulum's attachment up in the beams.

So that the pendulum will not stop, it is given a little shove by an electric coil mounted beneath the floor, which creates a magnetic field. The roof suspension is designed to minimise any other motions beyond the pure pendulum motion, with the aid of friction. Photo: Anders Berndt.

The pendulum was installed on the initiative of Mattias Klintenberg, professor of physics at Uppsala University, and was made possible by a donation from Johan Tysk.

“I have always been fascinated by Foucault's pendulum. It raises questions about how the heck everything can work together, and is an illustration of how science and technology interact. It's a magical gadget that gives us a sense of being part of something big,” says Tysk in connection with the donation.

The work of art IO

The slightly lopsided concrete block rising from the floor in the atrium is one part of the art work IO by the artist Karl Larsson. The other part consists of a book of poetry but, at the time of writing, this has not been presented. It is the Public Art Agency that is responsible for the work of art, in cooperation with Uppsala University. 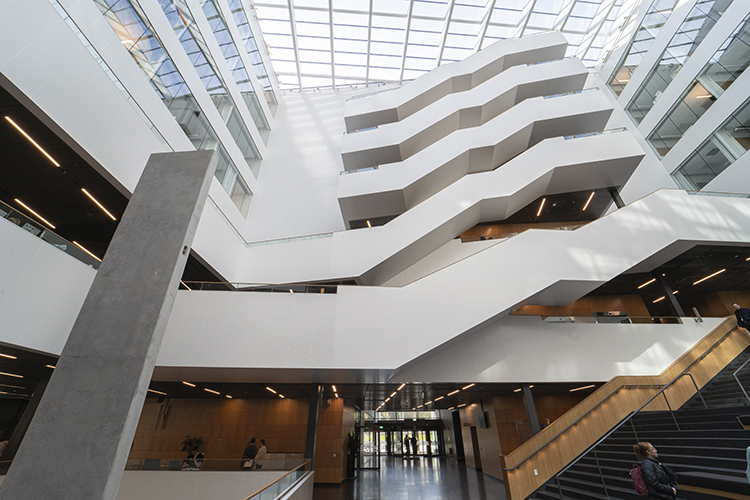 The sculpture IO weighs 20 tonnes and was lifted into place early in the construction process by two cranes. Photo: Anders Berndt.

The name IO alludes to various cultural and scientific concepts, such as Jupiter's moon, Input/Output and one/zero in the binary number system. For the artist, the concept glitch is central to the art work IO. Glitch is a computer gaming term for when the graphics do not work and the player glimpses something else. By trying to create a glitch in the architecture and through poetry, this work of art can inspire fresh analysis and descriptions of reality.

In its material describing the art work IO, the Public Art Agency writes that ‘The basic idea behind the work is that new knowledge is acquired partly through methodological studies of already established knowledge and its limits (traditional academic work) but also through sudden breakthroughs that arise by chance, breaches of order, mistakes or irrational impulses. [...] To enable the sudden breakthrough, the discovery to be identified, knowledge about and attention to the field of knowledge it is observed in are required. Contemporary art works in the same way, and it is also in the interaction between the well-known and the unfamiliar that IO comes into its own.’

Facts about the Ångström Laboratory

The first part of the Ångström Laboratory was officially opened in 1997 as an extension to the old regimental premises on Polacksbacken which Uppsala University moved into in 1987.

The Ångström Laboratory has since been extended in various stages. Construction of two new buildings began in autumn 2018 and was completed in spring 2022, with the move into Building 10.

Building 10 contains around 23,000 square metres of both teaching and research facilities, offices, reception, student services, places to meet, a restaurant, a library, a hall and a visualisation theatre.

The whole Ångström Laboratory has around 100,000 square metres of floor space after the extension. Now that the new buildings have started to be used, the University has vacated the old regimental buildings.

The University's buildings are usually named after a prominent scientist, but the Ångström Laboratory interestingly is named after both Anders Jonas Ångström and his son Knut Ångström. They were both professors of physics at Uppsala University in the 19th century.