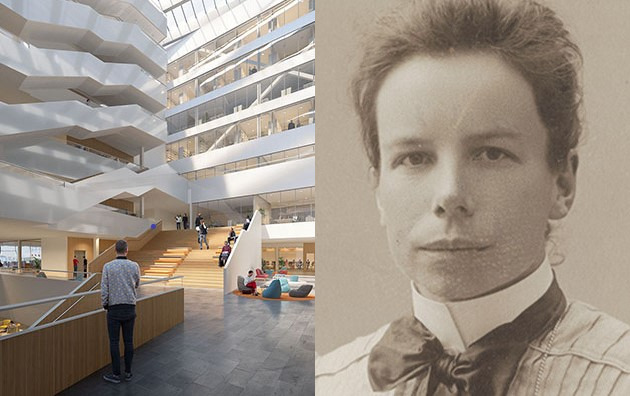 Several rooms at Nya Ångström will have names after women who have carried out important research, among them physicist Eva von Bahr who at one time worked at Uppsala University. Images: PE Teknik & Arkitektur/Uppsala University
2021-07-05

In May 2022 Nya Ångström or Building 10 at Polacksbacken will be officially opened. The names of nine of the building’s lecture halls and meeting rooms have now been decided on. The Vice-Chancellor established the names proposed by the Faculty of Science and Technology for four lecture halls, each seating over 100 people, and five bookable meeting rooms.

The rooms have been named after important people in science and technology – many of them women who have carried out important research:

Below are the justifications for the proposed names:

Eva von Bahr, 1874-1962
Physicist at Uppsala University and the first woman in Sweden to be appointed a docent in physics after having publicly defended her doctoral thesis and gained the highest grade in 1908. Her thesis concerned the absorption of infrared rays in gases. She worked under Knut Ångström, but as a woman she was not allowed to continue teaching after his death. Eva was refused a professorship in Uppsala and at Chalmers University of Technology, so she applied for a position in Germany, where she continued her important studies of absorption spectra.

Sonja Lyttkens, 1919-2014
Mathematician who worked at Uppsala University. The first woman to hold a lectureship in mathematics at a Swedish university, becoming a docent in 1957 and a senior lecturer in 1963. She was a highly respected inspektor (chair) of the Kalmar Nation, and subsequently became the Head of the Department of Mathematics. She was also committed to the work of improving the situation of women in academia, including working with a network that sought to encourage young women to study mathematics.

Evelyn Sokolowski, 1933-2019
Physicist who worked at Uppsala University.
She worked with Kai Siegbahn and produced findings on the chemical shift – the work for which Kai received the Nobel Prize. After her work in Siegbahn’s group, she chose to begin working in nuclear technology, which was then in its infancy in Sweden.

Ada Lovelace, 1815-1852
British mathematician often described as the first programmer. Worked with a mechanical computer – the Analytical Engine – together with Charles Babbage. The programming language ADA was named after Ada Lovelace in 1970 – a language originally designed for embedded systems and real-time programming.

Elsa-Karin Boestad-Nilsson, 1925-2020
Sweden’s first female programmer, who gained a Bachelor’s degree following studies in mathematics and physics. Worked on calculations at the Swedish National Defence Research Institute, later Head of the calculations group. She programmed the first two Swedish computing machines: BARK and BESK. Elsa-Karin also worked to promote gender equality and was active within the Fredrika Bremer förbundet (an association for promoting equality between men and women).

Gustav de Laval, 1845-1913
Swedish engineer and inventor. Gustaf de Laval publicly defended his doctoral thesis in chemistry at Uppsala University in 1872, was granted a total of 92 Swedish patents and started 37 companies. His most important inventions include the cream separator, a steam turbine, the de Laval nozzle and the milking machine.

Lise Meitner, 1878-1968
Austrian physicist who did pioneering work in radioactivity and nuclear physics. Did not get to share the Nobel Prize with Otto Hahn, despite her being involved in launching the nuclear-fission hypothesis. Meitner was friends with Eva von Bahr and lived in Sweden from 1938 to 1960.

Nya Ångström is the biggest construction project in the history of Uppsala University. Part of this project is the new entrance building – Building 10 – which will house several new classrooms and bookable meeting rooms, student areas, a reception, a library and a restaurant. The Department of Information Technology will move into its upper floors. The opening is planned for 13 May 2022.