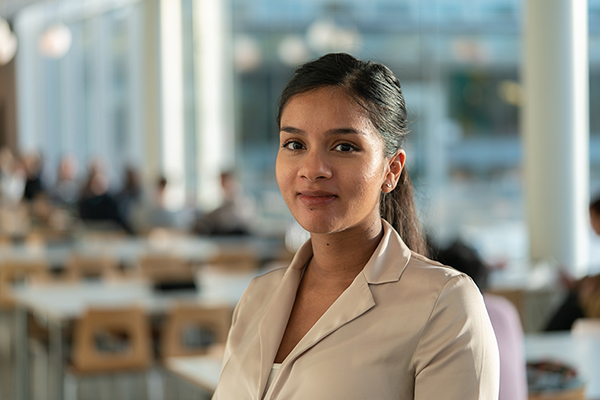 Aesha Sheik, study counsellor, talks about her impressions of Triplets, a model for continuing professional development that can be used in a variety of contexts. Photo: Anders Berndt.
2021-11-26

Study counsellors are offered continuing professional development (CPD) based on the new Triplets model that we have written about previously. We talked to Aesha Sheik who took part in the first round to hear what she thinks about the model.

‘Triplet’ is a musical term and means three notes equally spaced in time for one beat in a way that breaks with the pulse of the music, and Triplets in the CPD model is intended as a break from routine work.

The basic idea is that the participants are divided into small groups based on their stated interests. The small groups meet regularly and then present their conclusions on a topic at a final seminar. It’s essential that each manager approves participation in a Triplets group so that it is clear that time is allocated to it. The first Triplets round with study counsellors was completed in May 2021 and the hope is to be able to offer the Triplets method to study counsellors every two years.

“It was fun to get to know other study counsellors,” says Aesha Sheik, study counsellor and participant in the first Triplets round. “We got to see other perspectives; we have quite different areas of responsibility, study programmes and circumstances. This gave me an overall picture that I could take with me into my own work.”

The study counsellors were first invited to a brainstorming seminar on the structure for the Triplets meetings and got to choose themes that they themselves were interested in. They were then divided into groups based on their stated interests to learn more about the theme. Finally, they presented their newly acquired knowledge at a concluding seminar. The groups themselves had to decide how to present their theme to the other groups. The groups received ongoing support and were able to follow the work of the other groups.

The group Aesha Sheik participated in wrote and gathered various tools for study counsellors concerning the changing labour market and its impact on employability. They were to meet every two weeks but less often during periods when there was a lot to do.

“One advantage of the Triplets method is that the structure forces the organisation to create space in the work schedule and prioritise these meetings. Otherwise, it is easy for continuing professional development to get side-lined,” says Aesha Sheik.

What could have been done better?

“We had a meeting of all the groups to get feedback, and that was good. But it came a little late in relation to the concluding seminar. We had to rethink somewhat after the feedback but by then there wasn’t much time left,” says Aesha Sheik. “Then of course it’s easy to underestimate the time needed in the working group. One year sounds like plenty of time when you’re just starting out but it goes very fast. And we easily got caught up in different ideas. It’s important to make those ideas concrete at an early stage and make a clear plan.

“It’s also important to have an open atmosphere in the group and to be clear about not being able to participate or take on certain tasks in some circumstances because of your work situation,” Aesha Sheik says.

Do you think the Triplets method could work for CPD in other professions?

“Yes, definitely. No matter what you work with, Triplets can act as a kind of intelligence gathering, giving you perspective on societal development,” says Aesha Sheik.