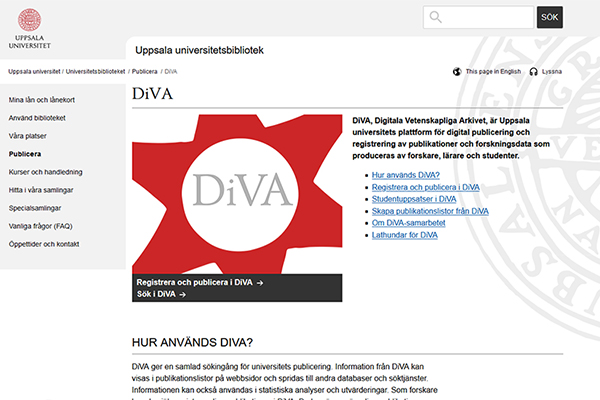 Top downloads from DiVA during 2021

Last year’s statistics on downloads from DiVA, the University’s digital platform for publishing and registering publications, highlighted the researcher’s role as editor for scientific publications.

Topping the list at the most frequently downloaded research publication was an article about Islam: “Magic in the ḥadīths” with 21,950 downloads. The article is published in the journal Orientalia Suecana, which is published by the Department of Linguistics and Philology at Uppsala University and uses DiVA as its publishing platform. The article was written by Irmeli Perho of the University of Helsinki.

The second most frequently downloaded publication (12,816 downloads) was a book published by the Baltic University Programme at Uppsala University. The book titled “Product Design and Life Cycle Assessment” was published in 2006 and was written by researchers in Poland and the Netherlands.

The third most frequently downloaded (11,557 downloads) was the doctoral thesis Proverbes des Bakongo by Oskar Stenstrom. It was originally presented in 1948 at the Hartford Seminary Foundation (USA), but the thesis was translated into French and published again in 1999 by the Swedish Institute of Missionary Research.

The next most popular was a student thesis about how teachers use technology in their teaching. “A study of the impact of technology in early education” written by Rafal Wajszczyk was downloaded 37,873 times.

But in third place, we return to the topic of online shopping. The student thesis “Online Shopping Behavior” was downloaded 20,486 times.

For all organisations using DiVA, just over 75 million (75,053,292) downloads were made. DiVA has 49 member organisations and in DiVA there are a total of over half a million full-text titles that are free to download.