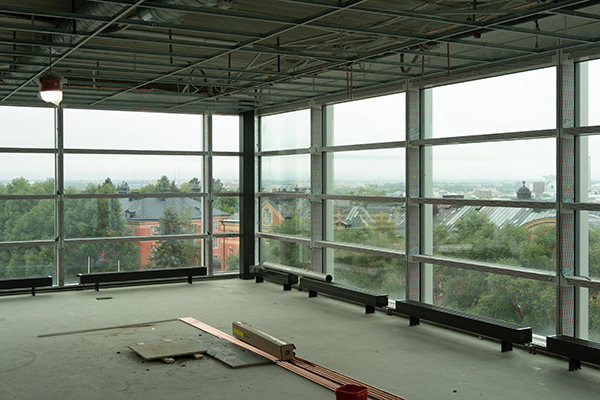 The future faculty room in the New Ångström Laboratory, building 10. The view from the room takes in the city centre with Uppsala Castle and the suburb of Boländerna. Photo: Anders Berndt.
2020-09-16

Inside the new building at Ångström Laboratory

The construction project consists of two parts: building 9, which has just been opened; and building 10, where construction is in full swing. Building 10 will house classrooms and student areas, a reception, a library, and a restaurant. The Department of Information Technology will move into its upper floors.
“The construction of building 10 is on schedule and the plan is to move into the new premises in spring 2022,” says Cecilia Broman, project manager at the Buildings Division.

It is interesting to note in the current context that the construction project has been very restrictive about receiving visits due to the risk of infection and that so far they have had very low rates of sickness absence among the construction workers. The view from the top floor is striking. You are at the same level as Uppsala Castle, looking down on the whole of Uppsala. From the outside, the building looks almost finished, with even the signage already in place. Up on the roof, the construction team are busy laying the weatherproofing layer. Inside the building, the framework of the central staircase has been assembled, the internal walls are being put in place in the upper floors and there too, the surface finishes are being applied. The further down inside the building you come, the less finished it is, with installations, internal walls and surface finishes yet to be completed. The glass walls of the upper floors that open onto the lightwell are just being installed. The lightwell extends up through the entire building and getting close to the edge is quite breathtaking. There is a balcony jutting out into the lightwell attached to the staff break room at the top of the building.

The larger floors near the bottom will be open to everyone and include classrooms, a library, a reception, and student areas.

Cecilia Broman says that the floor with classrooms will have seating for 1200 so there will be a lot of people in motion at times, but that the corridors and passageways have been well-dimensioned to avoid congestion. The Public Art Agency Sweden has contributed the artwork “IO” by artist Karl Larsson. Part of this artwork is a tilted concrete floor component which has already been mounted in place. It weighs 20 tonnes and it was therefore expedient to mount it at the same time as the building frame was erected.

In contrast to its floor component element, the other part of the artwork is a book of poetry that does not have any impact on the construction project itself. The title “IO” refers to cultural and scientific terms such as input/output and the ones and zeros of binary numbers. At the bottom of the building there will be a large auditorium that extends over two floors. The doors at the entrance have just been installed. The inside will have a coloured surface finish.