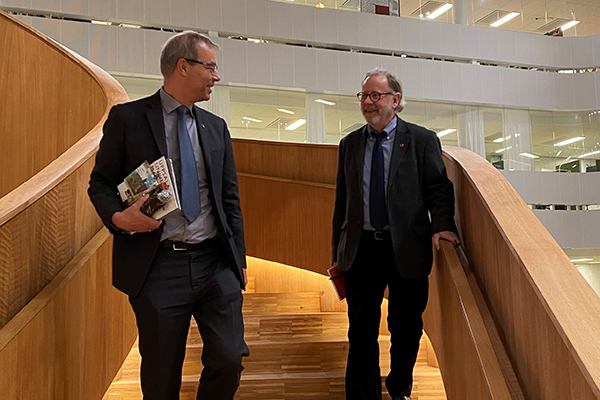 The Guild: an opportunity for influence

When Jan Palmowski, Secretary-General of The Guild, visited Uppsala University recently, he found there were plenty of interesting things to learn from Uppsala. He hopes more people will pursue issues through the network.

During his two days in Uppsala, Palmowski had time to visit several parts of the University and discuss a range of issues of common interest. Apart from conversations with the Vice-Chancellor and Deputy Vice-Chancellor, the discussions focused on research infrastructure, open science and experiences from the ENLIGHT European University and from cooperation with Africa in the International Science Programme.

“I have heard so much of interest. Your long experience of cooperative projects in Africa, the exciting initiatives CIRCUS and AI4Research. It makes me think about how to spread ideas more widely,” Palmowski says.

Time to look to the future

He thinks the network has achieved a great deal since it started five years ago. It has succeeded in putting forward important views on EU policy that have influenced research and innovation policy, and the sector, for many years to come.

“Now it’s time to look to the future and prepare how we want the network to evolve ahead of new framework programmes and the successor to Erasmus+.”

There are many issues of common interest to discuss in an international network of comprehensive research-intensive universities that are distinguished not least through their strengths in basic research, Palmowski thinks. And he makes it clear that The Guild is not just for university leaders, everybody who has ideas and want to be involved in key debates that affect universities at the EU level is welcome to get in touch. The network can also be useful for current issues at home. Then of course the big questions, such as where we will be in ten years, are highly interesting.

“That’s a question that ought to concern us all,” he says. “What will future students expect of us, what will the major societal challenges be then and how will that affect higher education institutions?”

The Guild (information in the Staff Portal)