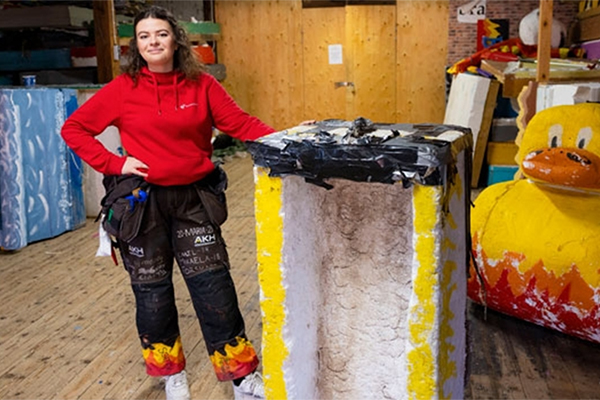 Emmy Sköld, project manager for the Running of the Falls, a bachelor’s degree in molecular biology and is currently studying for a master’s in ecology and conservation. Photo: Mikael Wallerstedt.
2022-04-27

Running of the Falls is back in all its glory

On 30 April, it is once again time for over one hundred rafts to set off on the Fyris River. This will be the first full-scale Running of the Falls event for two years – and the storehouse is crammed with building materials. “We have increased the number of rafts from 120 to 130,” says Emmy Sköld, project manager for the Running of the Falls.

We are meeting at Uthgård, headquarters of the Uppsala Union of Engineering and Science Students. It is here that the Running of the Falls is planned and where building materials for this year’s vessels are being stored in a Falu-red storehouse. All rafts are constructed here in a festival area beside the Ångström Laboratory between 20 and 28 April.

“Each raft has a crew of between two and four, so that is a significant number of people already, although a lot of people will come along just to have fun,” says Emmy Sköld. “We also have a pub tent with food and drink and on some evenings local bands and DJs will be playing.”

One major attraction is Anders Hagfeldt, vice-chancellor of Uppsala University, who will be participating in the Running of the Falls and will also being playing the drums with his band during the festival.

A younger audience was welcomed on 24 April for Duck Day. Until 2014, the annual rubber duck race took place on the Fyris River, but since then the event has taken place in the festival area. The programme included pony rides, candyfloss, pirates, a bouncy castle and other amusements.

“It’s a child-friendly day for all the family, so that they too can enjoy Walpurgis. All money raised will go to the Uppsala University Hospital Children’s Fund.”

Safety has been increasingly in focus since the first Running of the Falls took place in 1975. All rafters must wear a helmet, flotation suit and life jacket. Divers are strategically placed at the weirs on the Fyris River, ready to assist if anyone falls out of a raft. There are also a few places along the course where crews can call it a day and come ashore.

“While we keep a close eye on the water level and have lifeguards on duty, most incidents occur in the crowd rather than on the Fyris. I hope that everyone behaves themselves,” says Emmy Sköld.

There is an underlying environmental mindset, as the bases are saved from year to year. The paint is sponsored by local paint shops. It is all wrongly mixed and would otherwise have gone to waste.

There are also strict rules for how rafts are built. The base is the same for all rafts, made of cellular plastic, with a stable wooden frame and walls, all built by the rafters themselves. There is an underlying environmental mindset, as the bases are saved from year to year.

“Of the bases used in 2019, 67 are still in use. All of the paint we use is sponsored by local paint shops. It is all wrongly mixed and would otherwise have gone to waste, so it’s great for the environment.”

Looking forward to the finale

Emmy Sköld has a bachelor’s degree in molecular biology and is currently studying for a master’s in ecology and conservation. Having arrived in Uppsala in 2018, she has only experienced one Running of the Falls, in 2019. The event was cancelled in 2020 due to the pandemic, and in 2021 there was a smaller digital version. She is now looking forward to D-Day, which she has been involved in planning three nights a week since November along with the 23 other students on the committee.

What is the best thing about the Running of the Falls?

“The committee, after all they’re the people I have been working with for six months. They’re the best thing. But Walpurgis is the grand finale when we see it all realised. It’s fantastic!”