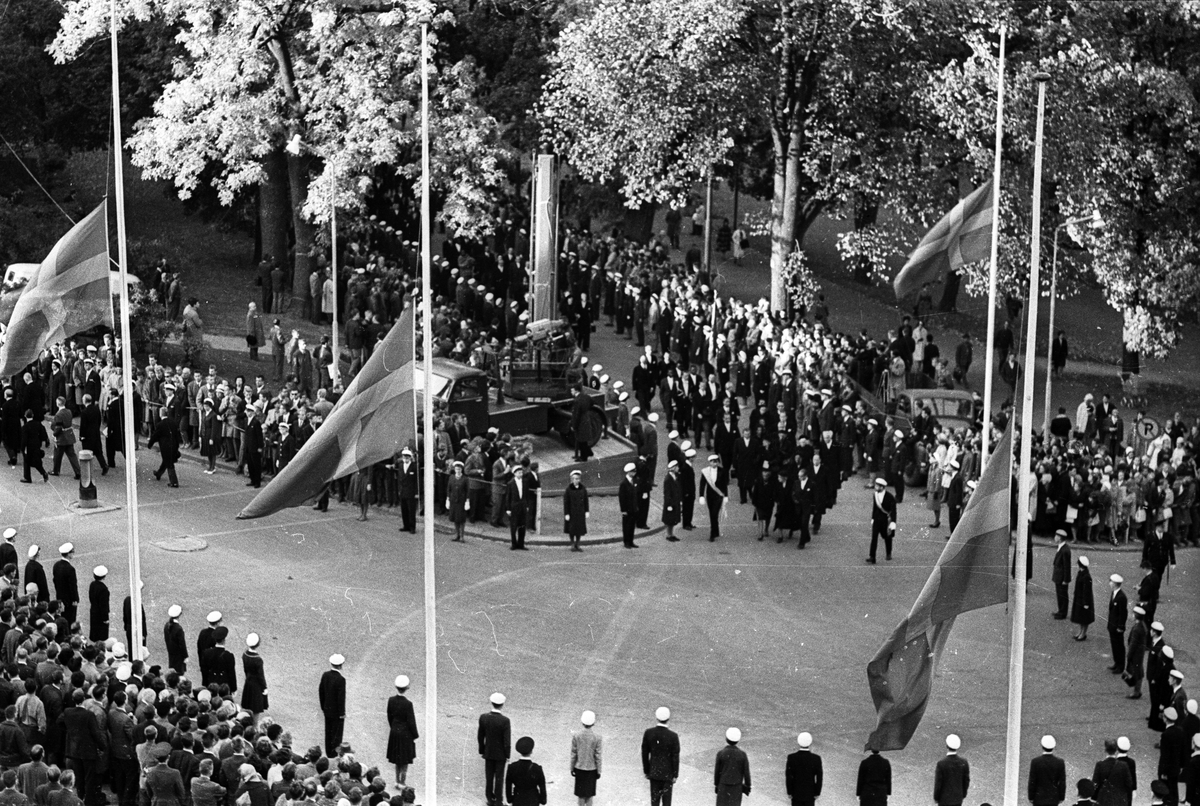 This year it is 60 years since Dag Hammarskjöld died in a plane crash in what is now Zambia – at the time, it was called Northern Rhodesia. When he was buried in Uppsala in 1961, the world came to Uppsala. Such a statesman’s funeral had never been seen before in this city.

The plane crash 60 years ago sent a shockwave through the whole country, perhaps felt most intensely in Uppsala. Dag Hammarskjöld, Secretary-General of the United Nations at the time, died in a plane crash on a journey attempting to solve the ongoing crisis in the Congo.

Peter Wallensteen, the first holder of the Dag Hammarskjöld Chair of Peace and Conflict Research Studies at Uppsala University (1985), recalls that day:

“I was in upper secondary school in Västerås and followed the news intensely, from the report that the plane had disappeared till the radio announcement at 4 pm on 18 September that it had been found and that Dag Hammarskjöld was dead. Just as we had feared...

“The funeral was a major national event. The entire school assembled in a large hall and teachers set up a 17-inch black-and-white television, on which we all tried to glimpse the drama. For me, and I should imagine for the whole country, he was a constant presence: there was a steady flow of news about the UN, the Soviet Union, the Congo, etc., and everyone hoped Dag Hammarskjöld would sort out all the tricky situations he and the UN were involved in. And for the most part, he succeeded!”

Soon after the devastating news of the crash, a memorial ceremony was held in Uppsala, in the University’s Grand Auditorium. More than 3,000 people came. People were everywhere – seated on benches, squatting on landings, perched in wall recesses – and all the windows and doors were open to enable as many people as possible to participate in the ceremony. 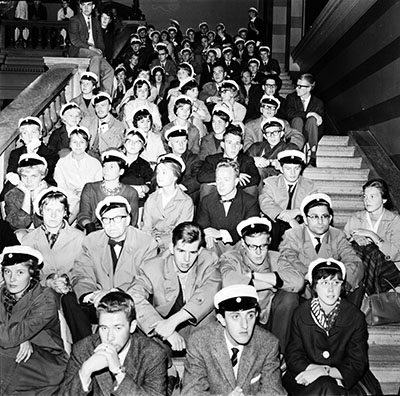 The University´s Grand Auditorium was more than full. (Photo: Upplandsmuseet)

University Guide Mikael Norrby describes the scene. He has immersed himself in old archives in search of news articles, pictures and other material for a film about Dag Hammarskjöld and the days around his death, i.e. the ten days between the news of his death and the funeral. The film will be launched this September.

Grown up in Uppsala

Dag Hammarskjöld had grown up in Uppsala, where his father was County Governor. He was also a student in Uppsala and took a degree that included studies in history, linguistics and literature, as well as economics and law, before proceeding to a doctorate in economics at Stockholm University in 1934.

“He was an outstanding student and raced through his studies,” Norrby says.

After completing his education, Dag Hammarskjöld pursued a career as state secretary, state secretary for foreign affairs and minister without portfolio before being appointed UN Secretary-General in 1953 – a position he held until his death. 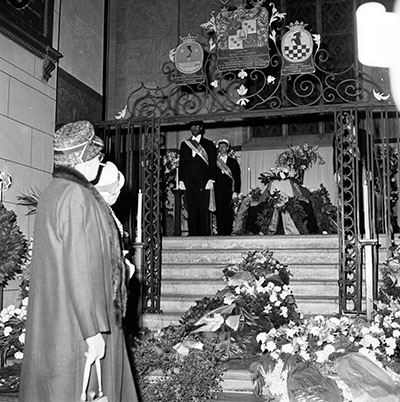 The coffin of Dag Hammarskjöld stood on "lit de parade" in the cathedral and more than 15,000 people filed past. (Photo: Upplandsmuseet)

The funeral took place in Uppsala on 29 September 1961. The coffin lay in state in the Oxenstierna Memorial Chapel in Uppsala Cathedral and over the course of several days, more than 15,000 people filed past, while student marshals took turns to stand guard.

It was also students who carried the coffin out from the Cathedral to the horse-drawn hearse. From there, the funeral procession moved across Odinslund, Carolina Hill, Öfre Slottsgatan, on to Kyrkogårdsgatan and into the Old Cemetery. 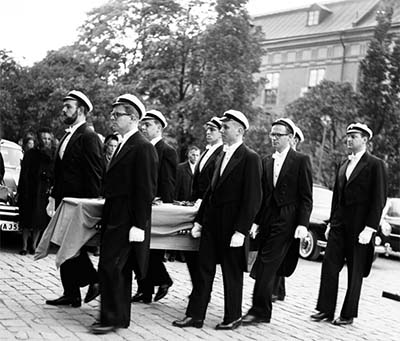 Students carried the coffin from the Cathedral and out to the horse-drawn hearse. (Photo: Upplandsmuseet)

“Students lined the way – 1,200 of them, spaced a metre apart, to show their respect for Dag Hammarskjöld. This was more than a third of all the students in Uppsala at that time,” Norrby tells us.

“The students along the funeral route included our former Vice-Chancellor Stig Strömholm and the future diplomat Hans Blix.”

The US Vice-President came

Leaders from around the world gathered in Uppsala that day, on a scale never witnessed before: top politicians, chiefs of staff and officials from all over the globe: Europe, Saudi Arabia, India, the entire leadership of the United Nations, the US Vice-President, Lyndon B. Johnson.

“No doubt it was a flying visit for him,” Norrby says.

Dag Hammarskjöld strove to make the UN more independent and more politically active. He scored several personal diplomatic triumphs in his role, including the 1956 Suez Crisis, where he established the first peacekeeping forces and introduced a UN ‘presence’ in conflict areas as a new method for the UN.

He received the Nobel Peace Prize posthumously in 1961 for his contributions to peacekeeping in the UN.

But what made Dag Hammarskjöld so prominent and highly esteemed a person in Uppsala?

Perhaps there is something in the reflection Mikael Norrby shares: Dag Hammarskjöld showed that being a diligent public servant could lead all the way to appointment as UN Secretary-General – in a position to change the world.

Peter Wallensteen sums it up well:
“His integrity, creativity and intuitive sense of what was possible in difficult political situations. One could say he had been brought up in the Swedish ethic of public service: incorruptible, innovative within set frameworks, without a thought of personal gain or even honour and fame.
“And Uppsala was obviously a place he thought a lot about. He wrote an article, Slottsbacken, in summer 1961, which was published in the yearbook of the Swedish Tourist Association in 1962, one of the last pieces he wrote. It’s about the year in Uppsala, as he must have experienced it from his home at the Castle, where his father was County Governor.

“Moreover, he was curator of Upland’s Nation for a while and a law student, though he took his doctorate at Stockholm University – with Gunnar Myrdal as external reviewer!”